The article I reposted yesterday Gambling with America’s health! 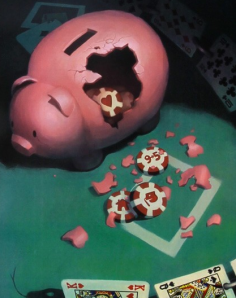 – mentioned how members of  Gamblers’ Anonymous saw gambling addiction, or gambling disorder, as an emotional rather than financial disease. The addicted person “wants to escape into the dream world of gambling” and “finds he or she is emotionally comfortable only when ‘in action.’”

This very revealing statement “emotionally comfortable only when ‘in action’.’” ties in with what we have being proposing in this blog. That addicts of various varieties engage in motoric or repetitve behaviours prompted by a desire to alleviate emotional distress, that somehow motoric of repetitive, compulsive behaviours almost people these individuals “regulate” or control their emotions. In the language of treatment centres, they “fix their feelings” via these obsessive-compulsive activities.

So there must be an inherent  emotional processing and regulation difficulty which prompts these addictive behaviours. As we have seen in previous blogs, the inability to regulate  and process emotions appears to lead to a recruitment of more motoric or compulsive (sub-cortical) parts of the brain rather than goal-directed, action-outcome, prefrontal cortex part of the brain. This leads to less conscious decision making and more “automatic pilot” type of responding.

In a study we have recently come across pathological gamblers  reported significantly less use of reappraisal as an adaptive emotion-regulation strategy, and reported a greater lack of emotional clarity and more impulsivity than individuals in the healthy community comparison group. Pathological gamblers reported a greater lack of emotional awareness compared to the healthy control group and reported differences in access to effective emotion-regulation strategies compared to both comparison groups (1).

“Failures in control over gambling are likely to be influenced by individual coping styles. Problem-focused coping includes active and effortful problem solving, while emotion-focused coping includes escape and avoidance behaviours (Lazarus & Folkman, 1984). Scannell, Quirk, Smith, Maddern, and Dickerson (2000) suggested that loss of control over gambling is associated with emotion-focused coping such as avoidance or escape. This suggestion has been supported by evidence that gamblers demonstrate deficits in coping repertoires (McCormick, 1994) and some rely on gambling to provide an escape from personal or familial problems (Corless & Dickerson, 1989; Lesieur & Rosenthal, 1991). Finally, in a sample of adolescent gamblers, those identified as at-risk for developing pathological gambling behaviours were those who exhibited more emotion-focused coping styles (Gupta & Derevensky, 2001).
Gambling behaviours, therefore, seem to be associated with a deficit in self-control
processes that may be exacerbated by reliance on coping styles characterized by
avoidance and escape. At a more basic level, difficulties managing emotions effectively may contribute to the use of maladaptive coping strategies and result in failures in self regulation and impulse control. Optimal self-regulation relies on being able to focus on long-term goals in the presence of emotional distress that tends to shift attention to the immediate present (Tice & Bratslavsky, 2000). In addition, struggling with one’s feelings may deplete coping resources and leads to decreased self-control (Baumeister, Muraven, & Tice, 2000), leading to increased risk of disinhibited or impulsive behaviour.

Emotion regulation refers to strategies to influence, experience, and modulate
emotions (Gross, 1999). Although there are several factors that influence whether a
certain emotion-regulation strategy is adaptive in a particular situation, certain strategies appear to be costly and maladaptive. For example, suppression or avoidance of emotions is associated with increased negative effect and anxiety, physiological activity, and physical pain (Campbell-Sills, Barlow, Brown, & Hoffman, 2006; Gross & Levenson, 1997; Levitt, Brown, Orsillo, & Barlow, 2004; Masedo & Esteve, 2007). Experimental investigations also support the notion that the effort of suppressing emotions drains mental resources (Richards & Gross, 2000), which could lead to decreased self-control.

Ricketts and Macaskill (2003) investigated several techniques that gamblers use to modify their emotions, one of which was the technique of ‘shutting off’ or using gambling in order to stop an unpleasant emotional state.

Patients who used the technique of ‘shutting off’ were often the ones who also reported poorly tolerating emotional discomfort (Ricketts & Macaskill, 2003).
According to Baumeister, Zell, and Tice (2007), emotional distress leads to an increase in self-awareness, which consequently leads to a desire to decrease ones self-awareness. but at the cost of self-regulation.

If one is unable to self-regulate, this could lead to an addiction or a relapse of an addictive behaviour (Sayette, 2004).

Measures of emotion regulation have proved helpful in identifying patterns of
emotional responding associated with a range of substance-dependent population.

Specifically, we investigated the association between emotion-regulation deficits and gambling pathology using two measures of emotion regulation, the DERS and the Emotional Regulation Questionnaire (ERQ; Gross & John, 2003). The ERQ examines the habitual use of two specific emotion-regulation strategies,
namely expressive suppression and cognitive reappraisal. The use of suppression reduces the outward expression of emotions in the short term, but is less effective in reducing emotions in the long term and is, therefore, considered a maladaptive emotion-regulation strategy (Gross, 1998; John & Gross, 2004). Cognitive reappraisal involves changing the meaning associated with a particular situation so that the emotional impact is altered (Gross, 1999; Siemer, Mauss, & Gross, 2007).

We hypothesized that pathological gambling would be associated with increased
habitual use of suppression and decreased use of reappraisal on the ERQ and deficits in emotion regulation across multiple domains on the DERS,  the gambling group would rely more on suppression as a habitual emotion-regulation strategy and report increased difficulty regulating their emotions. We also predicted that the gambling group would report less use of reappraisal as an emotion-regulation strategy compared to the healthy control group.

Contrary to expectations, we did not find a significant relationship between gambling behaviour – although the gambling group reported a greater lack
of awareness of their emotions so may account for the lack of association between self-reported gambling behaviour and suppression efforts. If gamblers demonstrate less awareness or insight into their emotional states, there may be less need to suppress emotions.

Once a habitual pattern of gambling behaviours has been established, the combination of emotional vulnerabilities, conditioned responses, distorted cognitions, and decision-making deficits maintain the cycle of pathological
gambling. Blaszczynski and Nower (2002) suggest that such emotional vulnerabilities make treatment more difficult in this particular group of gamblers and emphasize the need to address these underlying vulnerabilities in addition to directly targeting gambling behaviours in therapy. It may, therefore, be of therapeutic benefit to specifically assess for and target emotion-regulation strategies in this population of gamblers.

Given the gamblers in the current study demonstrated limited access to effective strategies for managing difficult emotions, it may be important for clinicians to address coping strategies (including emotion-focussed strategies) as a part of any comprehensive treatment package.

It is also important that the clinician is aware of any deficits in emotion-regulation strategies to ensure that the client is prepared to guard against relapse, given that the ability to tolerate distress is associated with increased length of abstinence from gambling (Daughters et al., 2005).”

An easier way to live with acceptance, compassion, and transformational self healing.