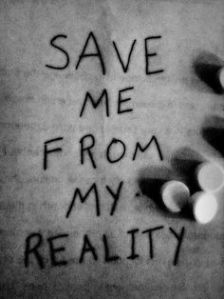 In most traumatic events there is an accompanying feeling of terrified helplessness. Whether it’s a soldier looking on helplessly as his fellow soldier gets killed or a fireman seeing person burn in a fire, just out of reach or someone looking on as a loved one tries to kill herself.

There is that feeling of falling into an abyss.  A moment of true wordless horror. This the moment of trauma that leads to a life of post trauma, to PTSD.

A moment that is so unbelievably bad and terrifying, that the brain and heart struggles to comprehend the extent of it, fails to process the magnitude of it, fails to lodge the event in their long term memory and script of their life. Instead it makes you roam your life like an emotional Steppenwolf, scared to ever return to the warm of common humanity.

It is like an explosion that detonates in the brain and blows holes in stress systems and lives on in fragmented, fractured memory and in heightened fearful emotional responses to the world which are somehow not explainable. They require post hoc and retrospective explanation because they seem inordinately over reactive to events that prompt them.

This event will haunt the future and appear to  live on in one’s very bones. It has not been exorcised so lives on as a neural ghost haunting one’s reactions to people, places and things.

I know what my explosion is but not the intimate details. I have asked one of my sisters to help me piece together the broken pieces and scattered  debris of my memories of the event but she has struggled to.

First she was sure she was right in describing it a certain way and now has changed her mind to describe it a different way. With a different sequence of events and characters. It has been frustrating not being able to transport oneself back in time and simply look at a previous event in one’s life but there are so many self defense mechanisms making that process extremely difficult.

Either way, we are still not convinced about the aftermath of the event. We seem to be looked at a charcoal penciled sketching of pictures of the past which often get scrubbed out and started over. We have tried desperately, for hours this weekend, to piece and glue our scraps of memory together to make a bigger, more fuller picture, like a collective collage.  We might do this for weeks and still not get a definitive picture and memory of what truly happened.

I spent a few years, many moons ago, trying to write fiction. In fact I wrote about my family and this incident but purely, I believed, from my imagination but mixed with some historical signposts. Looking back, this writing from the heart may be more accurate that our attempts to rescramble our collective memories?

I and my sister have been trying to get to the moment of horror. To look at it again as adults not children, traumatized children.

We are convinced that it happened only once, thank God but that it has had major consequence and repercussions on all my sisters and I.

It would not be outlandish to suggest that all our lives took a major redirection that day. I, when talking to my sisters, see now that the huge similarities we seen to have are all because we are traumatized by the same event. We have post trauma personalities.

How we reacted to the same trauma seems to have frozen us into certain personalities.

My sister who ran for help is still running, in her personal life she continues to trust no one.

My eldest sisters still pretends, that it did not happen  as she may have dissociated from the actual event when it was happening – not wishing to believe that it  could be happening.

My third sister still bristles with anger and hostility at my “scary monster” of a mother who scared the life out of her children over forty years ago by attempting to swallow a phial of pills.

It is hard to describe what this level of rejection  and devastation felt  like. I will try to explore it again tomorrow in my next EMDR sessions.

The problems with asking a sister to help you remember is that you not only view the same scene differently, depending on gender, emotional loyalities, age etc but that the effects the traumatic incident had on you still affects how you recall it.

For example, my sister who ran to get help, talks about the event in a skimming, superficial, running through it type of way. She still doesn’t want to delve deeper into it as it is still  too scary. She is still running with the ten year old shaky, adrenaline fueled legs that took her to my uncle’s house to get help, not knowing how bad her mother was and whether something monumentally terrible had and was occurring.

I was left with my mother after she had taken the pills, slumped on the bathroom floor, without an adult to tell me things were going to be okay?  God knows the feelings I had, being so helpless? The despair I must have gone through in this few minutes between my mother throwing the pills down her throat and my sister returning with help? It must have felt a bit longer than eternity?

I will find out more no doubt tomorrow

Interestingly I would say decades later that one of my major weaknesses in life is my ability to tolerate uncertainty about future events and to handle distress adaptively.

It has been the greatest issue in my recovery, it is tempting to speculate that this behavioural response started as the consequence of not knowing the future prospects for my strewn mother, lying with tablets dribbling out her mouth on the bathroom floor?