Does a person with alcohol issues have to hit rock bottom in under to surrender and start recovering?

Does one have to go to the bitter end before surrendering to the recover process?

My own experience showed  that I had to concede to my innermost self that I was/m alcoholic and that I needed help from others.

For me it was a “low-bottom” or “last gasper” rock bottom but for many it seems to be a high bottom.

I had lost practically everything and for some they had lost little compared to me but they had seen the road ahead and realised it was not going to get any better without accepting help.

This shows there is more to alcoholism than alcohol, that these people realised their negative behaviours and their consequences were causing them as much distress as their drinking. They did not like who they were becoming or the effect it was having on others around them , their loved ones, families and friends and employers.

I maintain also that there are also many different variables that contribute not only to one’s alcoholism and it’s severity but also in one’s chances of getting into recovery sooner rather than later. Environmental factors such  as ethnicity, income, place in society, class can often play a role and social and therapeutic support networks as well as childhood maltreatment such as trauma, various types of abuse, insecure attachment issues etc in alcoholism severity. 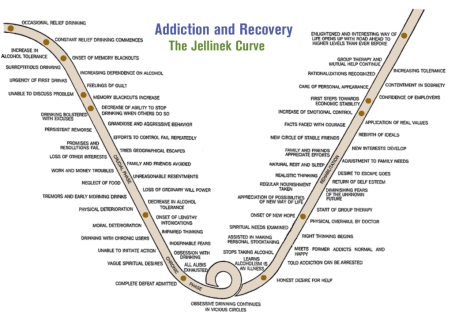 Many more alcoholics seem to have stopped drinking before losing what was important to them are motivated to pursue recovery than those who lost nearly everything, including health, family, friends, and jobs.

Individuals are accessing treatment via support networks much earlier in their drinking and may not have to experience the multitude of physiological, mental, emotional, financial, legal relationship and other problems low bottom alcoholics frequently do.

“The concept of hitting bottom persists within Alcoholics Anonymous (AA) even though the backgrounds, addiction experiences, and therapeutic options of AA members are now radically different than they were at the group’s founding. Understanding what AA members now mean by hitting bottom is important because the experience describes the point at which they become willing to seek help—professional treatment, AA, or both.

Among the most controversial aspects of AA is the idea that alcoholics will seek help only when their “illness” has led to “pitiful and incomprehensible demoralization” (AA, 2001, p. 30). Those words originally appeared in the 1939 first edition of Alcoholics Anonymous, but by the time of the publication of the 1953 commentary, Twelve Steps and Twelve Traditions (AA, 1953), the idea had changed in contradictory ways. The instance of help seeking received a name (“hitting bottom”) that suggested an objectively fixed point. On the other hand, the experiences of those entering AA demonstrated that such a point is relative, and not fixed. AA was helping “people who were scarcely more than potential alcoholics” so it was “necessary to raise the bottom” (AA, 1953, p. 23).

Denzin (1987) provided the succinct definition used in this article: “Bottom: Confronting one’s alcoholic situation, finding it intolerable and surrendering to alcoholism. Accompanied by collapse and sincerely reaching out for help; may be high or low” (p. 134). The hitting bottom concept originally reflected the experience and outlook of AA’s founders and pioneers in the 1930s.

“Which description best fits the ‘bottom’ you hit as an alcoholic?” This categorical variable had three potential values: high, middle, or low.

The study found that Whites, religious people, and episodic drinkers were less likely to be low bottoms when they began recovering.

Alcohol-related problems were most clearly associated with level of bottom, supporting recent findings that problems increase the odds that an alcoholic will perceive the need for help and will seek help (Grella et al., 2009).

A fundamental tenet of AA is that alcoholism is progressive, so that alcoholics “get worse, never better” (AA, 2001, p. 30). Supportive of this progressive framework is the finding that problems distinguish high bottoms from low bottoms. The difference was most clear in the categories of social and physical problems, indicating that early identification of these problems could signal a need for intervention, particularly if the individual drinks constantly or uses drugs other than alcohol.

A recent study by Field, Duncan, Washington, and Adinoff (2007)reported an inverse relationship between motivation to change and alcoholic problem severity, suggesting low-bottom alcoholics might be less motivated than high-bottom alcoholics to pursue recovery.”

The salutatory lesson from this for me from this study is that we should never pronounce when another addict or alcoholic has had enough! That quite clearly is for them to decide not us!
It appears almost counter intuitive for some, if not many,  that many more alcoholics, who seem to have stopped drinking before losing what was important to them, are motivated to pursue recovery than those who lost nearly everything, including health, family, friends, and jobs.
This is very noteworthy as it runs contrary to AA experience in the early days when most alcoholics seeking recovery were low bottom.
This would suggest that widespread societal awareness that there is a solution has had a profound effect on alcoholics seeking help for their illness much earlier than in the early decades of AA.
This has profound effects on earlier intervention as these individuals can access treatment via support networks and may not have to experience the multitude of physiological, mental, emotional, financial, legal, relationship, family and other problems low bottom alcoholics frequently do.
If we can alleviate suffering we should also seek to do so and help others to do so as early as possible.
You do not have to lose everything in order to surrender to 12 step programs of recovery. For me there is  a real message of hope in this study, that alcoholics can seek help earlier without having to experience the various hardships of low bottom.
References
1. Young, L. B. (2011). Hitting bottom: Help seeking among Alcoholics Anonymous members. Journal of Social Work Practice in the Addictions, 11(4), 321-335.